Word of Mouth marketing is one of those extremely effective promotional tools acknowledged by both academics and practitioners over the years. Ever since the Internet and social media start to dominate our lives, traditional word of mouth marketing renewed to be electronic word of mouth marketing alias e-WOM.  As researchers grew interest on digital marketing, their attention also started to run towards e-WOM and theories. Authors have reviewed the theories, models and conceptual frameworks related to e-WOM’s relationship with consumers and brands, credibility of e-WOM and also the linkage between e-WOM and motivation through empirical researches and discussions.  I will be critically revise what have been discussed in past literature throughout this blog post.

Conceptualising e-WOM marketing and its’ effect

In early 1970s’ psychologist George Silverman, identifies word of mouth marketing as a concept when he investigated about opinions on a new pharmaceutical drug through a focus group including physicians which was named as “teleconferenced peer influence groups”. During the research he found out that, two physicians who had positive experience with the drug led the discussion and succeed to turn physicians who even had negative experience to have a new positive mind about the product. Accordingly, Silverman states that, one individuals’ words are extremely powerful on influencing other individuals’ actions (Kimmel and Kitchen, 2013).  Since then, academics introduced various models, theories and concepts related to WOM not only in marketing literature but also in psychological and social literature (Brown and Reingen,1987 cited in Kang and Sivadas, 2018). Arndt (1967) defined WOM as “oral, person-to-person communication between a receiver and a communicator whom the receiver perceives as non-commercial, concerning a brand, a product, or a service.” Arndts’ definition inspired all the follow up definitions of WOM of other authors (e.g. Brown and Reingen, 1987; Mangold & al.1999; Womma, 2006).

In modern days, digital advancement gave birth to new concepts such as digital marketing, email marketing, social media marketing etc. Internet era also aided to expand WOM to e-WOM (electronic word of mouth). Present researchers (Ho and Dempsey, 2010; Huang, Lin and Lin,2009) claim that, all of these internet centred concepts are inter-related with each other (Goyette et al., 2010). Hennig-Thurau et al. 2004 cited in Strutton, Taylor and Thompson, 2011 defined e-WOM as ‘any positive or negative statement made by potential, actual, or former customers about a product or company, which is made available to a multitude of people and institutions via the Internet’. The term ‘internet’ in their definition compress digital platforms such as social media, blogs, forums, websites, emails and messengers. These platforms are the basement of e-WOM. e-WOM can be generated by two contributors; Marketers and users. Figure 01 shows some examples of digital platforms where users and marketers generate e-WOM usually. 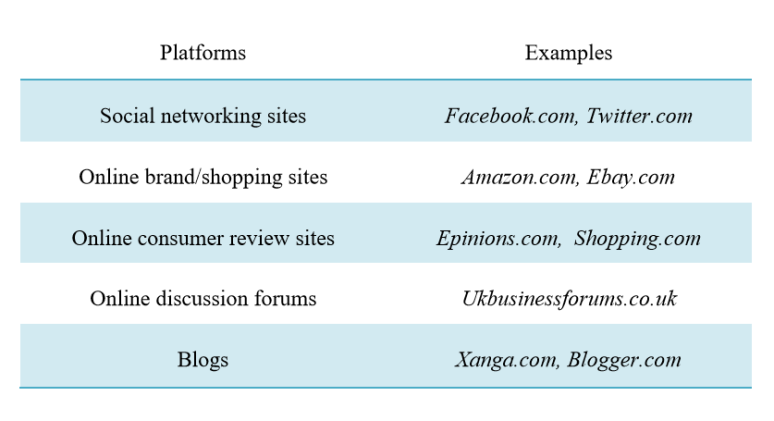 Source: Adapted from Cheung and Thadani, 2012

In literature, researchers highly argued about who has the most impact of e-WOM; consumers or brands. Bickart and Schindler (2001) claims that consumer have biggest impact from e-WOM according to his study on online forums and customer. However, their argument got criticized by many other authors (Raguseo and Vitari, 2017; Elseidi and El-Baz, 2017) as the focus of their research was only on consumers and in 2001 (year article published) e-WOM was not very well-known among customers or brands. Therefore, the validity of research findings of Bickart and Schindle’s is questionable. Nevertheless, researchers such as, Gruen, Osmonbekov and Czaplewski (2006), Pizzutti dos Santos and Basso (2012) proved that, e-WOM has an effect on both consumers and brands at a same level. Moreover, Abrantes, Seabra, & Lages (2013) indicates that, in terms of consumers e-WOM does has an effect on consumer beliefs, values and behaviours since today’s consumers who are living in the digital world tend to share not only their experience with a brand but also like to link their personal believes and views when expressing. Therefore, e-WOM helps brand to actually get insights of customers when they are engaging in e-WOM for strategical development.

As digital platforms create the link between customers and brands, both parties are becoming more concern about e-WOM. That’s why user generated content is becoming more and more important for brands and also for customers. Users generate content through posting reviews on forums, reactions, sharing, rating and also recently product unboxing video. What is more interesting is, other individuals are making their purchase decisions according to those reviews or comments. Almossawi (2015) carried out a research to find out the most effective communication tool; WOM or advertising. Research findings highlight that, individuals are tending to believe in other individuals’ word than excepting or believing advertisements. Similar study carried by Gretzel et al.(2007), but as an observational research mention that users posts about best travel tips such as best places to stay, best restaurants has more views and sharing on social media than the content provided by the trip planners and make their decision on their newt trip according to those comments. Chen et al. (2015) indicates that e-WOM is now a part consumer decision making process. What is more, in terms of brands, e-WOM makes it easier for brands to gain consumer insights at a lower cost but in a more effective and efficient way.

Findings of most of these researches revealed that e-WOM is an organic, effective and the most powerful marketing communication implement among the all other marketing tools (e.g. Buttle 1998; Kim, Han and Lee, 2001; Stokes and Lomax, 2002; Trusov, Bucklin and Pauwels, 2009).

However, Sahelices-Pinto and Rodríguez-Santos (2014) disagreed with above authors claiming as internet and digital platforms has no limitations, e-WOM is practically overpowering. They also point out that, when a brand follows an e-WOM strategy, there will always be an uncertainty of how the word will get spread and where it will end (Positive or negative). Furthermore Moran, Muzellec and Nolan (2014) who carried out a qualitative study to find out the relationship between influencer marketing and e-WOM and argue that e-WOM no longer is an organic communication tool since brands financially reward influencers to spread the positive word.

e-WOM’s credibility has also been debated a lot in academic literature. Even though Almossawi (2015), states that individuals deem another individual over advertisement of a brand, Levy and Gvili (2015) argues stating that there is a confliction between the trustworthiness of the user generated content and user identity on internet platforms. In addition, researchers such as Gupta and Harris (2010); Chang and Wu (2014); Lee and Koo (2012) claims that negative e-WOM has more influence on brand image than positive e-WOM. According to Mudambi and Schuff (2010) research regarding Amazon online reviews, participants states that when they see a negative review they are more likely to not to make decision to buy that particular product and when they see a positive review it does not encourage much for them to buy that product either. Further author states that, this type of negative e-WOM can improve the credibility of e-WOM since most of individuals are deeming on negative e-WOM.

Another reason why consumers are believing negative e-WOM is due to brands’ unethical e-WOM tactics. Influencers are one of best way to spread e-WOM. An individual who has reasonable number of followers on their social media account or a blogger who has many subscribers can present as influencers. Bokunewicz and Shulman (2017) argues that, influencer marketing is not trust worthy anymore, since brand are financial rewarding influencers to make positive word on social media regarding their brand. Thus, it causes to consumer misleading and negative e-WOM is influencing highly on the credibility of e-WOM. Therefore, researchers such as Christodoulides, Michaelidou and Argyriou (2012) suggest future researchers to focus on negative impact of e-WOM. However, that make a gap in the literature by disregarding the positive reviews impact. Therefore, future researchers must focus on the influence of positive reviews as well.

Volume is another important connection with e-WOM which literature has discussed over the years. According to Yan et al., (2016), high volume of comments, rating, views or sharing has a significance influence on consumer purchase decision and also authors highlight that when the e-WOM volume is high on a certain product, the probability of consumer viewing the product is also high. Volume can contain both positive and negative reviews or any e-WOM form. For instance, amazon consumers are always view the products which has higher volume of ratings. Because they believe that, certain product is worth for try than trying a product with less volume of reviews. In terms of brands, having a high volume of reviews, sharing, likes or comments can enhance the search engine optimization. Furthermore, if a product or a service has high volume of any kind of e-WOM form for their brand, negative reviews automatically becomes invisible due to the influential positive reviews (Ye, Law and Gu, 2009).  However, Sparks and Browning (2011) who did a research about the online reviews in hotel industry claims that, higher volume of text reviews are not influential as few number visual reviews. Authors further clarify the argument stating that, hotel consumers are more likely to see pictures or video as review since it makes the review more trustworthy.

Reza Jalilvand and Samiei (2012) empirically investigated the auto mobile industry in the Iran to analyse the effect of e-WOM on brand image and purchase intention. Their research findings indicate that e-WOM has a direct impact on brand image and purchase intention and these are connected. Findings indicates that, there always a reason behind why individuals participate in before and after a purchase. Participants of the process, car buyers state that they seek the help of e-WOM the most when they feel uncertain of the products and when they want to make a confident buying decision. After purchase, they use e-WOM mostly to share their positive or negative experience and to show other the decision they made by buying a car. In the research discussion Reza Jalilvand and Samiei (2012) pointed that, there might be motivational reasons behind e-WOM participation and for the future studies, authors recommend investigating on e-WOM and motivation.

Gupta and Harris (2010) discovered reasons behind why individuals engage in e-WOM through applying the motivation theory into their e-WOM research. According to the research findings, authors indicates that both intrinsic and extrinsic motives have an impact on individuals’ engagement in e-WOM, but intrinsic motives have a bigger impact than extrinsic motives. A study on same area by Serra and Soto-Sanfiel (2014) revealed that since Maslow’s hierarchical theory proven that individuals’ intrinsic motives are stronger than extrinsic motives, there is a link between e-WOM, motivation and Maslow’s need hierarchy. In their methodology one of the participant stated that, he/she write reviews of the products to show other individuals what he/she has bought. Authors further explained that, this is how individuals fulfil self-actualization need in the digital century. However, all these researches have undertaken as quantitative studies. Thus, in-depth understanding of the subject area hasn’t generated since those researches were focusing on elements, statics and numbers. Therefore, there is a gap in literature for qualitative methodology on the subject area of e-WOM, motivation and Maslows’ theory.

It seems that even though current literature has covered most of e-WOM related subject areas, there are gaps still need to fill.

Amossawi, M. (2015). The Impact of Word of Mouth (WOM) on the Bank Selection Decision of the Youth: A Case of Bahrain. International Journal of Business and Management, 10(4).

Raguseo, E. and Vitari, C. (2017). The Effect of Brand on the Impact of e-WOM on Hotels’ Financial Performance. International Journal of Electronic Commerce, 21(2), p.253.

Stokes, D. and Lomax, W. (2002). Taking control of word of mouth marketing: the case of an entrepreneurial hotelier. Journal of Small Business and Enterprise Development, 9(4), pp.355.